The approach and algorithm is based on this Stackexchange answer, and these related resources: eskerda.com/bsp-dungeon-generation and gamedevelopment.tutsplus.com/tutorials/how-to-use-bsp-trees-to-generate-game-maps

The sprites used in this post come from existing games and are used here only for learning purpose.

Let’s start with a new 2D project in Unity 5. Create a new Game Object called Board for holding the whole dungeon. On this game object create a new Script component called BoardManager. We’ll code the dungeon generation logic into it.

I recommend you refer to the stackexchange answer above for the illustrations of the following steps.

The idea of the algorithm is to start with a rectangular cell representing the whole dungeon. Then we’ll split this dungeon in two sub-dungeons, with a randomly chosen splitting position. The process will be repeated again for each sub-dungeons recursively, until the sub-dungeons are approximately the desired size of a room.

Then set the public variables for board and rooms size in the Unity editor.

When launching the game you should have something like this in the console :

We now have a tree structure with the leaves corresponding to the smallest sub-dungeons. In each of these leaves we’ll now create a room with a random size.

Add the following variable and method to the SubDungeon class :

And call it in the Start() method :

Drawing the rooms ½: add a sprite for the floor

Instead of relying on console output, it would be more intuitive to start having a visual representation. First thing is to add a sprite for the floor of the rooms. You can use this one

and add it as an asset in your project.

Also be careful to set the Pixels Per Unit to exactly the size of the sprite (16 for this sprite), so that the sprite will cover exactly a square in the board.

Next create a Prefab with this sprite (drag and drop it on the scene screen, then drag and drop back the object in the assets):

In the script we’ll need to add a public GameObject variable to hold this prefab:

Then in the editor drag and drop the prefab to set it.

Drawing the rooms 2/2: write the code

Back in the script we add a method to draw the rooms. Also as we draw the rooms, we’ll register the drawed squares in a variable representing the board called boardPositionsFloor. This variable is not really useful at first but will be essential when starting to construct a game above.

And in the Start() method initialize boardPositionsFloor and call DrawRooms on the root:

You should get something like this in the scene view :

Now that we have a visual feedback, it’s also easier to play with the parameters :

Isolated rooms are not very useful, so we’ll add corridors between them. To do so, we’ll connect each leaf to its sibling. Then going up one level in the tree, we’ll repeat the process to connect parents sub-dungeons, until finally we connect the two initial sub-dungeons (see the stackexchange answer for illustrations).

Add using System.Collections.Generic; at the beginning of the script, then in the SubDungeon class add:

And now the method to create the corridor between rooms:

You should see the corridors being created in the console:

It’s hard to see visualize without the corridors being drawed but for this example it would look like this:

Same as before for the rooms we’ll need a sprite

, a prefab in Unity and variable to hold the prefab:

Next create a prefab:

And add a variable in the code:

And finally set the variable in the editor:

Draw the corridors 2/2: write the code

The drawing function will be quite similar to the one for the rooms:

In the Start() method, you can call DrawCorridors before DrawRooms to better see what is going on:

If DrawRooms is called before :

Now that the random generation is working future improvements could be adding walls and of course a player sprite and controls and enemies.

And with a camera on the player and some further improvements it can become the basis of a simple rogue-like or dungeon crawler:

The landing page is a map with places around you fetched from the database (new places are eventually added through a request to OpenStreetMap). When you click on a place you can see comments from other people and leave yours. 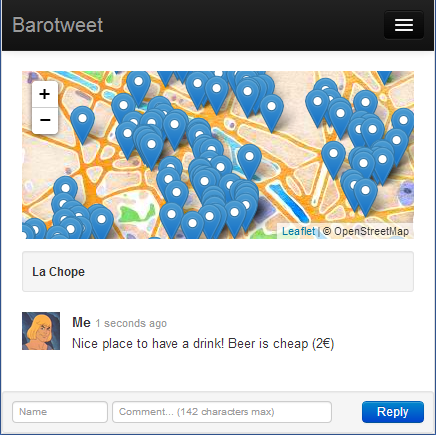 Technically the app features these concepts/technologies :

This is a Paris public transports route planning POC webapp.

You can try it here : http://www.rombdn.com/fxos-metrobusparis/demo2/

Source for the DATA transformation : https://github.com/rombdn/ratp-gtfs-to-json

When the RATP opened their data earlier this year I thought it was a good opportunity to create an offline route planning app acrosse the whole public transportation network.

The technical challenges were : – The full subway (metro) and bus graph, including edges with informations like durations, had to fit in less than a MB to minimize loading time – The shortest path search had to be fast.

The DATA provided by RATP are 1GB of flat text files with informations on every route, trips, stop times for each day of the year…

Some simplifications I made :

This is achieved with 2 scripts : the first in C to parse the file stop_times.txt (650MB, millions of entry) to create the raw edges, and the second in ruby to create the graph (JSON format).

The first version was a straight forward implementation of Dijkstra’s algorithm. It was too slow so I decided to use a priority queue.

I started from a binary heap implementation from the book Eloquent Javascript by Marijn Haverbeke link.

Binary Heap with Keys source (idFunction is the method called to get the index).

Note: this post is based on the idea of Named Constructors from the Coccyx library

In this post I showed an example of a memory leak in Backbone, and how to troobleshoot it using the Chrome Heap Profiler :

But identifying these views is not easy because models extended from Backbone Model/View have their constructor named child in the Heap Profiler.

A solution to this problem would be the possibility to name the constructors. Here is a simple hack to do that :

Simply add a case for an optional constructor name :

Note: due to the use of ‘eval’ it is not safe in production…

Example with the leaking view from part 1

Now the Views Constructors are correctly named in the Heap Profiler :

Hope this will help!

The Heap Profiler in Chrome is a great tool to analyze memory usage in web applications. Here are some useful links :

Why do we have to worry about memory management in JS when there is a Garbage Collector ? Because memory leaks can still happen : as long as an object is referenced by another it cannot be disposed by the GC. These references are “Retaining Paths” in the Heap Profiler.

A common source of these problems are event binding : events are references, which prevent object to be destroyed after they are removed from the DOM. This can happen with Backbone Views.

Here is a simple example (using the Backbone global object as an event mediator) :

Nothing should appear in the console because every view is removed after its creation. As we can see this is not the case : the views are still catching greetingEvent and displaying a message.

A heap snapshot confirm that all the ZombieViews are still here (extended Backbone models have their constructor named child, see this post for a solution).

Why the views aren’t removed ?

If we take a heap snapshot we can see that the greetingEvent is in the retaining path of the views. This path prevent the GC to dispose the object.

Let’s modify the code with a call to listenTo instead of Backbone.on. With listenTo models can keep track of events binded so they can be unbinded by the remove method and thus allow the GC to dispose the attached views.

This time nothing shows up in the console, which is the expected output : all the views where removed, none catched the event.

Note: You may have noted that the views have their constructor named ‘child’ which complicate identification, a solution is provided in this post.

I used Box2DWeb, a javascript port of box2d 2.1. It lacks features like rope joint but I realized it too late… More up to date ports i didn’t try :

Load all resources attached to a html file

Useful when working with frames to avoid one http request per frame (I use this a lot when scripting for PeopleSoft ERP).

Extract a value to a variable with a regular expression

You can use a Debug Listener to adjust the regexp. In this example (PeopleSoft) I checked “Main sample and sub-samples” because the value to be extracted is in a frame.

In this example I verify that the Regular Expression hereabove worked.

Javascript in parameters (e.g. to randomize a choice)

First we get the number of values :

Then we replace the parameter with our javascript :

In JMeter it becomes :

This is my personal blog.